WARNING! Tangled Stories from the Grave! 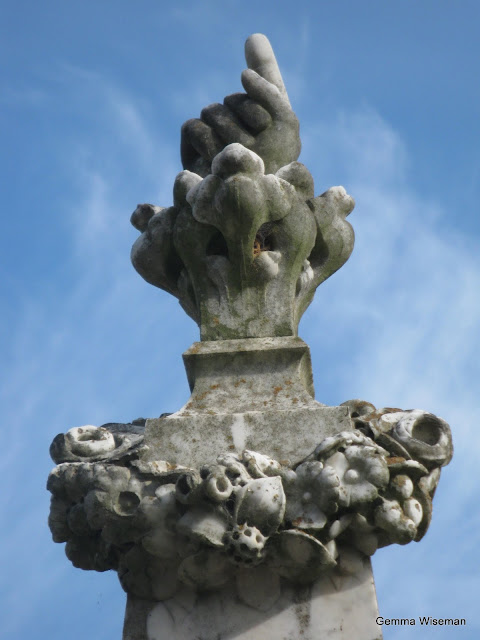 Always an unusual grave feature attracts my interest, and then I go exploring the details.
This feature is at Mornington Cemetery on Port Phillip Bay. 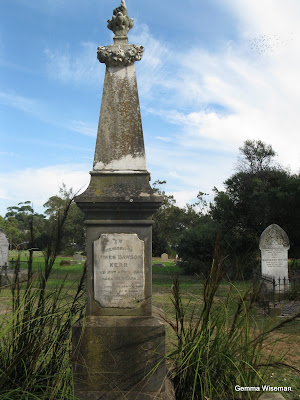 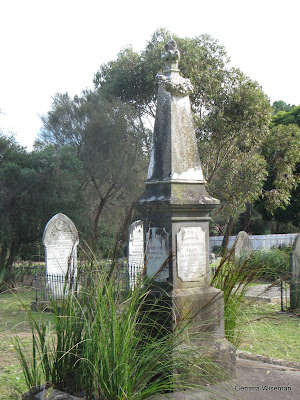 And here is the full grave site view from 2 perspectives.
It looks like some pedestal marker. 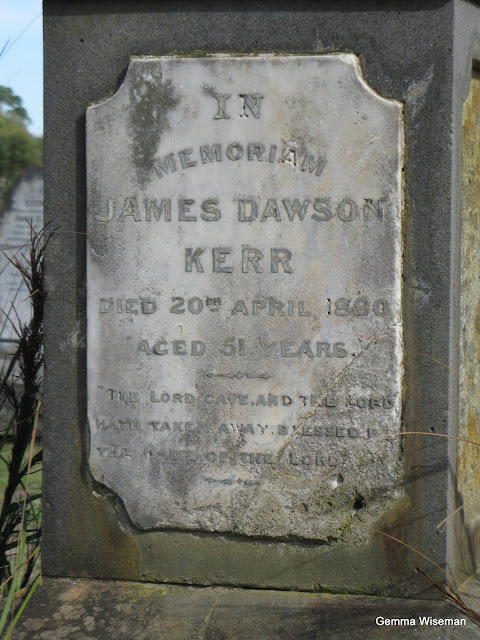 This is the grave of James Dawson Kerr, who died in 1880 and his wife Jane.

And the intrigue begins.

NOTES
1. Another website (HERE) says:
Bella Vista was built in 1889 for John Kerr a farmer from Tarrawingee (North East Victoria)...It is thought Kerr lived here around 1898.
So Jane dies in her adopted son's home?
(Comment - It seems odd that a farmer from north-east Victoria toddles down to build a house at Mornington on The Esplanade overlooking Port Phillip Bay then moves into his father's Melbourne house!
In 1861, he was still judging a ploughing match at Tarrawingee. - Trove
In 1890 John Kerr was listed as being from Tarrawingee when he sold 123 fat lambs at Melbourne markets. - Trove
Did he build it for his father as a holiday home?
Many homes built on The Esplanade at Mornington were holiday homes for the 19th century Melbourne elite.
And Tarrawingee, in Victoria's High Country and just south of Beechworth, was part of the Ned Kelly gang country in the late 1870's!!!)

2. Robison Bros is the oldest surviving engineering and metalwork business in Victoria.
It was established in 1854.
Robison Bros were the pioneers of the centrifugal pump in Australia.
Their first pump was built in 1874.
(Ref: 100 Years of Engineering in Victoria)
Jane's death notice suggests that hubby James Dawson Kerr was an important figurehead in the evolving of Melbourne rather than Mornington.

And mysterious stories continue in this family...

THE SON OF JOHN KERR?
OVERSTUDY AND SUICIDE Melbourne, July 22.
James Dawson Kerr, clerk in the Statistician's office, committed suicide at his residence, 12 Simpson Street, East Melbourne to-day, by cutting his throat with a razor. The deceased, who was only 25years of age, was of a particularly ambitious and studious disposition. He filled in his spare hours preparing himself for a university degree, and overstudy is said to be chiefly responsible for his fate. Sometime ago he left his home to reside in Carlton in order that he might secure in absolute quiet. Yesterday he returned home and it was at once noticed that he seemed peculiar. A doctor was called in, and he decided that it would be well to keep the young man from his studies for a while. He was kept under constant watch, and not once during the night was he lost sight of. At about 9 o'clock this morning he went into his room, and his father followed him. From that he passed to another room, and his father hesitated in following him for a minute or two, fearing he would make the lad unnecessarily un easy. When he went to the room it was to find his son falling to the floor with a gash in the throat. Ref: Trove -  The Advertiser (South Australia) - 23rd. July 1910

Gemma, peoples' stories always interest me, and this one offers enough scope for a novel. It is wonderful how you bring these lives into the light of day - stories that would otherwise be forgotten. The poor young lad.........what an interesting grave marker......

Interesting history! Future generations will probably not have this avenue for research as cremation becomes the norm....

Goodness that is a rather tangled and mysterious story.

this might have been easier to sort out if everyone didn't have almost the same name!

i always have to laugh when seeing such a hand on a grave. to me it looks like a hand coming out from the grave... perhaps the person was not dead.. ? :)
sad to commit suicide because of studying too much...

Blimey! What a wonderful pandora's box you have opened here, Gemma.

The adopted son ... Born in Scotland in 1858 which was AFTER James emigrated to the colony. And seeing he married in 1846, I presume Jane emigrated with him, although this may not have been the case. My ancestors emigrated at different times, although married. But not with a 10 year gap. I wonder if Jane remained behind and 'got' with child ...

That is a chilling report of the suicide. I would think that parental expectations may have been immense, and parental oversight way too much. But that thought is from a modern perspective.

This is a wonderful post, Gemma. Just brings the past so vividly to life, even though we are still very much in the dark as to some of the facts.