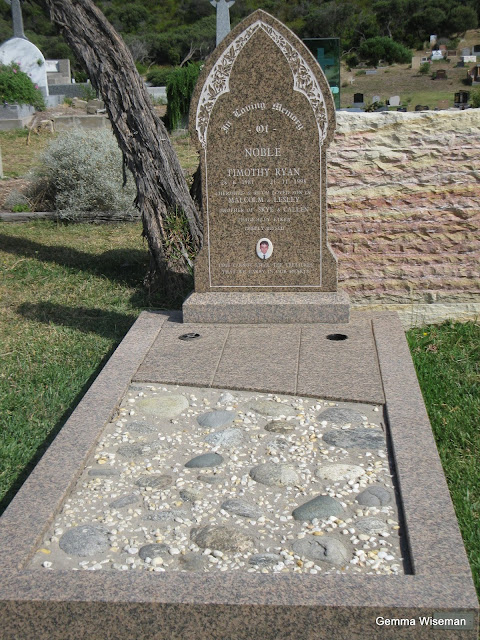 Timothy Ryan Noble's grave may be sited at Sorrento Cemetery on the far south of the Mornington Peninsula, but his tragic car accident, on 21st November 1998, occurred at Frankston, the northern gateway to the peninsula.

His sister Skye gave a presentation to the Teenagers Road Accident Group.
She explained that in total there were 8 boys in the car, 2 in the front, 4 along the back seat and 2 in the luggage compartment.
It was an accident waiting to happen.
And it did.
3 of the boys were killed, one being her brother.

All boys were in the final stages of Year 11 at The Peninsula School.
The driver was an unlicensed 17 year old.

Details of Skye's presentation are HERE!
Richard Jones, also a passenger in the car, gave another presentation to the Teenagers Road Accident Group - HERE!

The Peninsula School now has a Memorial Scholarship to honour the memory of the students killed.
Details HERE!

Media of the day presented many perspectives of this tragedy.
One article HERE gives an insight into all boys involved - including the driver Gene Thomas.

But perhaps the most poignant story emerged in The Age 12 years later - August 10, 2010.
Finally, the son of The Peninsula School's principal in 1998 gave a little of his story.
David Hille travelled in this same car, but walked away from the wreckage unscathed - at least physically.
About a year after the accident, he was drafted into the Essendon football club.
He became an icon there, using sport as a release from his private tragedies - losing friends in a car accident and losing his mother to depression and eventual suicide.
Sport has always been the undercurrent, the support mechanism, that has kept me going.

COMMENTS:
I chose today to tell this tragic story of teenagers because now begins a crazy cycle till the end of November.
Senior students embark on deb balls and formals (our school had one last weekend) and valedictory dinners before the final exams; before that big step into the big wide world.
And in that time frame they seem to get licences.
And in that time, accidents seem to happen.

If just one teenager reads this post, explores the links, looks at lingering consequences of avoidable crazy driving situations, and then makes wise driving decisions, this post has been worthwhile.
I so hope!


Linking to:
Taphophile Tragics
Posted by Gemma Wiseman at 12:04 AM

How sad he was so young when he died.

This has taken the better part of an hour to work my way through, Gemma. What a life lesson it contains, and from so many viewpoints. None of them right, many of them wrong. All fo them real, and ongoing.

I wonder, though, do you have a personal involvement ...

So sad that so many lives can be changed so radically by one momentary laspe in the understang of consequence.

Such a tragedy with so many lives involved. This happens everywhere unfortunately. Young boys are driving to fast and have terrible accidents. They are so reckless. Hope anybody of them wiil read your post.

That's a really sad story and a lesson to all, young and old.

A sad situation but all too common. Impulsive behavior, often lubricated by alcohol, leads to tragedy. A fateful instance that can't be undone.

Amongst healthcare workers this time of year is often referred to as the 'Donor Days'. It happens every June/July/August in the UK. Something else for the youngsters to think about perhaps. Hope your wish comes true.

So many lives are affected by such senseless tragedies. Sometimes, I think, the ones who survive have it worse.

that is a sad post...
but some people are reckless, regardless of their age...