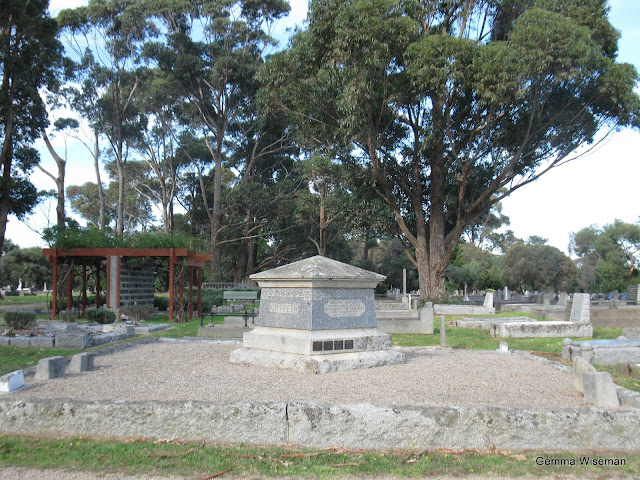 If you think that this looks very much like a garden bed with a central feature, then you are close to the story behind this family grave site. 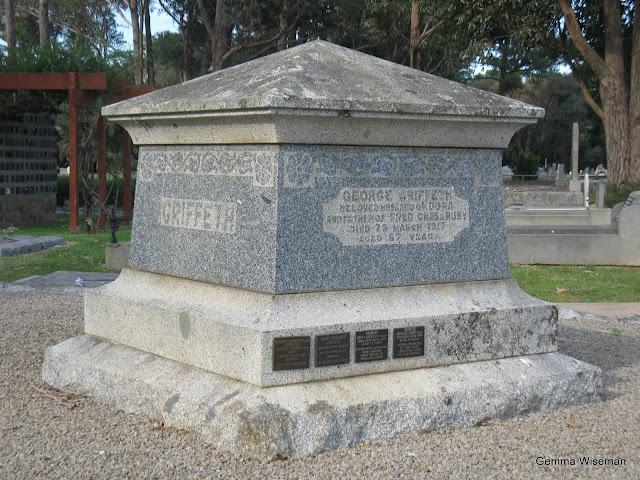 Brothers Charles and George - the founders of this nursery - died of natural causes. 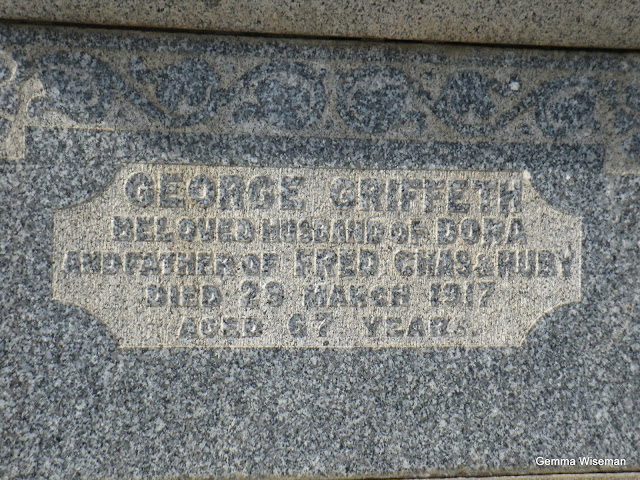 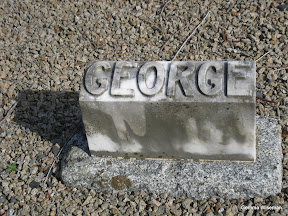 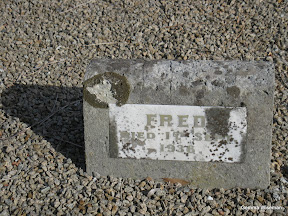 The death occurred at Moorooduc on Monday night of Mr. Charles Griffeth, managing director of Two Bays Nurseries and Orchard Co., Pty. Ltd. He was aged 81 years. Mr. Griffeth and his late brother, Mr. George Griffeth, were the founders of an extensive business of nurserymen and orchardists carried on at Somerville, Moorooduc, Nyah, and other places for many years. The brothers were born in the State of New York, U.S.A., and came to Australia more than 50 years ago. The business is now carried on at Moorooduc, the orchard comprising about 700 acres. Mr. Griffeth was a widower.
- The Argus 7th November 1934. on Trove

But the Charles who carried on running the business suffered a quite different fate.

Councillor Charles Melbourne Griffeth, president of the Shire of Mornington and managing director of the Two Bays Nurseries, was found dead this afternoon in unusual circumstances. Councillor Griffeth left the nurseries at 10 o'clock this morning with the intention of going into Mornington. At 10 minutes to 3 o'clock his car was seen in the orchard, and the wire fence was down. Mr. Griffeth wai found lying dead under the car. Councillor Griffeth, who, aged 44 years, had apparently cranked the car while in gear, and had been crushed to death. He leaves a widow and two children.
- The Argus 1st January 1932 on Trove
NOTE: Strangely, I missed seeing a plaque here for this Charles??? Yet he should be here with wife Leila.
But Australian Cemeteries records that Leila died at St Kilda, further north on Port Phillip Bay while Charles is buried here at this plot.
Yet St Kilda Cemetery records show no Leila Griffeth, in facts no Griffeths at all.

**And there is an eerie connection between the Two Bays property and 2 other tragic events on the peninsula. 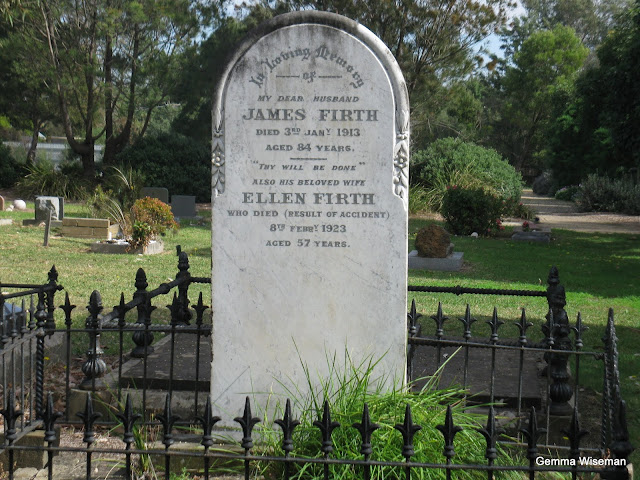 Mrs James Firth died in tragic circumstances in February 1923.... Middle aged Mrs Firth was driving across Moorooduc Crossing at a moderate speed when she saw a train coming.... Certain that the car would be hit, she clambered into the back seat (according to a witness) and then jumped out of the car in blind terror. Ironically the car rolled out of harm’s way while Mrs Firth jumped right in front of the train. Trove shows that the incident was reported in the Argus as well as in newspapers in Brisbane, Rockhampton, Hobart and Perth.
Extract from Family Tree Circles

This incident was on the then property of Two Bays Nursery.

But there's more!
I posted the story of the drowning of footballers in Port Phillip Bay 21st May, 1892.
Ellen Firth's brother (brother-in-law?) John's 17 year old son James was among them.
My post was A Minister's Rocky Road - of Rev James Caldwell's involvement with this tragedy.


A fruitful lifestyle
Growing seeds of the future
Tragic connections


Linking to:
Taphophile Tragics
Posted by Gemma Wiseman at 12:04 AM

People do the most perplexing of actions, almost as though they are indestructible. Who would crank a car whilst it was in gear? And yes yes ... as a child on our farm, I had on numerous occasions to crank both tractors and jeeps.

Ellen's scrambling into the back seat immediately brought to mind Jacquie (?) Kennedy.

Love these stories you unearth for us. Well I remember the story of Rev Caldwell who could not take a trick.

They should have planted it and made it a garden bed.

I must say, you and Julie have amazing sleuthing skills and you, especially, unearth some very interesting tales!

Great research, I hope the surviving members of this family have had better luck than some of their ancestors.

so much tragedy for any family.

This is the stuff that mystery novels are made from!

jumping from a driving car? thats just the weirdest thing! she was driving herself as i understand from your post, right?
thats so sad!
interesting its noted on the stone died "result of accident", such a weird way of noting that...