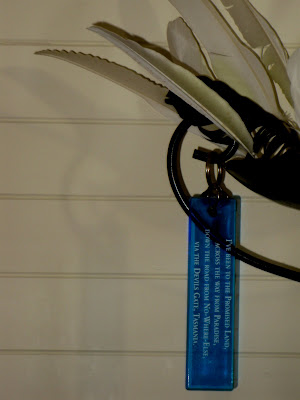 Pic by Gemma Wiseman ~ Souvenir from northern Tasmania.
~
Blue Monday meme
That's My World Tuesday XL
~
It looks plain and insignificant, but what it says on this blue plastic key ring is amazing!
I've been to the Promised Land
Across the way from Paradise
Down the road from No-Where-Else
Via the Devil's Gate, Tasmania.
Each of those names represents real names of real places in Tasmania.
No-Where-Else is a hamlet with a remarkable pottery gallery!
P.S. I purchased this at an incredible tourist attraction called Tasmazia (check out this website for a taste of living fantasy) in the Promised Land outside Sheffield in the north of Tasmania.
~
The world of Tasmazia is a crazy complex located in the wonderfully named town of Promised Land in the heart of Tasmania's beautiful Cradle Mountain and Lakes District.
Tasmazia includes 8 mazes, featuring The Great Maze, reputedly the world's largest, as well as The Village of Lower Crackpot, a whimsical model village built to 1/5th scale, The Honey Boutique, The Pancake Parlour, a Gift Shop, a Lavender Farm, and ever present views of majestic Mount Roland...
Tasmazia is the brainchild of Brian Inder, a former farmer, who has transformed his Promised Land dairy farm into this brilliant 20,000-shrub lavender farm, then devised and built the incredible mazes, Lower Crackpot, and the rest of this magical world over 20 years.
Brian Inder (as he is known to his mother) prefers to go under the name of Laird Crackpot of the Village of Lower Crackpot, along with his wife Laura, have simply got up and created a quite magical world of their own...
The inspiration has clearly come from far and wide; the Great Maze is reputedly the World's Largest, one of the mazes is an exact replica of the famous one at Hampton Court Palace in England, another has a Wizard of Oz theme, while there's a memorial to the inventor of the toilet at the end of the absolutely infuriating Cage maze...
~
The Village Motto is 'Fractis Sed Utilis', which translates, 'broken but still useful', which a cracked pot is.
~ 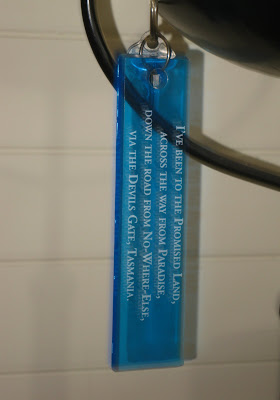 Posted by Gemma Wiseman at 9:23 AM

Gemma, Tasmazia sounds like a great place to venture. I would love to try my hand at walking through that maze. I enjoy doing things like that at fairs and such. Hope all is well. Have a great night.

Fascinating! How I'd love to go there. Happy Blue Monday.

Have a great week.
Regina

I love to visit places where I learn something. This stop was really interesting. Thanks for sharing your knowledge of Tasmania with us.

TFS! This was very interesting and such a beautiful shade of blue.

What a great place and what a lovely blue reminder! Just had a friend of mine in Australia send me some lavender soap from Tasmania and I love it! Great, fun post!

That was facinating, hve a great week!

What fun - we have a Hell, Michigan, near us, but there's not much there: a bar and two stores selling "Been to Hell" tee shirts and the like.

Tazzy is a great place isn't it? Nice post.

Tazmazia sounds like a really fun place to visit !!!

Thnkyou for the tour and it's going on my bucket list :-)

Gemma, this looks like lots of fun.I like photo number one it has so much going on, showdows and all the different textures, great shot

I have both blue monday and thats my world @
http://moorebloglife.com