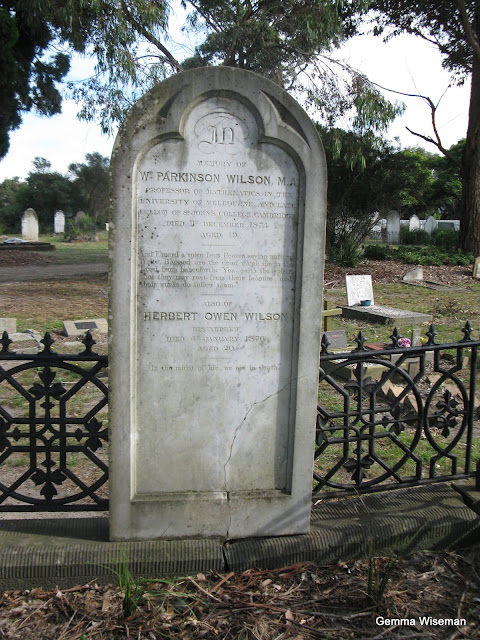 This grave for William Parkinson Wilson is at Mornington Cemetery on the Mornington Peninsula.
Born in 1826? in Northamptonshire, England, he was founding professor of mathematics at Queen's College, Belfast in 1854.
But a year later, he was one of the first 4 professors appointed to the University of Melbourne.
He may have been a Professor of Mathematics, but his special interest was astronomy.
In 1871, he led an expedition to north Queensland to observe an eclipse of the sun.
He established an observatory at Mornington.
In 1874, he participated in observations of the transit of Venus.
Two days later, on 11th December 1874, he died of cerebral haemorrhage.
William had been suffering ill health for some time, but perhaps the excitement of this event contributed to his death.
He was just 49. 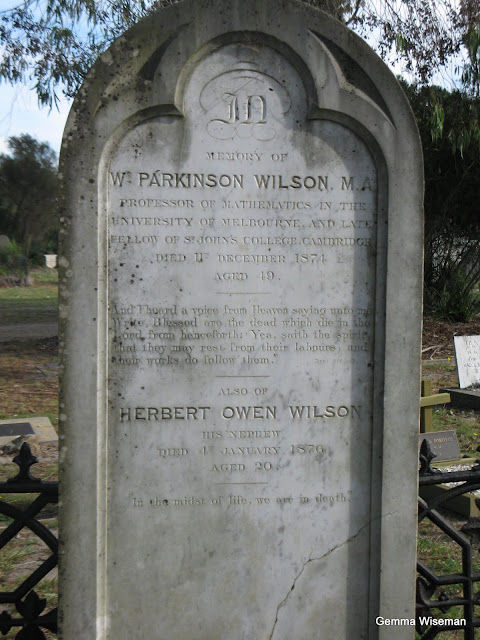 William was a bachelor, lived in university apartments and later maintained a house in Mornington named Wolfdene.
(According to one source, it was formerly Mornington Hotel for some 10 years after 1858 and then became a school?)
As Mornington was only accessible by water or horse back at the time, it is presumed he only stayed there when the university was in recess.
But he took care of the education of his two nephews.
This partly explains why his nephew's name appears with him on his headstone.
More information on the varied career of this academic is HERE!

An academic
A man of many colours
Who loved star gazing

sounds like he contributed to society/ family and lived a full life. such a tragedy when ones life is taken so soon. hope all is well.

haven't heard of any other deaths over the excitement of the recent Transit of Venus!

Forty nine is so young!

Wilson's life and death epitomizes the wisdom that it is better to go out in a blaze of glory rather than to fizzle out slowly.

Sure, the professor was only 49. but his nephew was only 20!

What is a 'sizarship' and what is a senior 'wranglar'?

There are some things about this gentleman that lead me to believe he would be a very hard chap to be married to, happily. A short person with a temper is not a pretty sight.