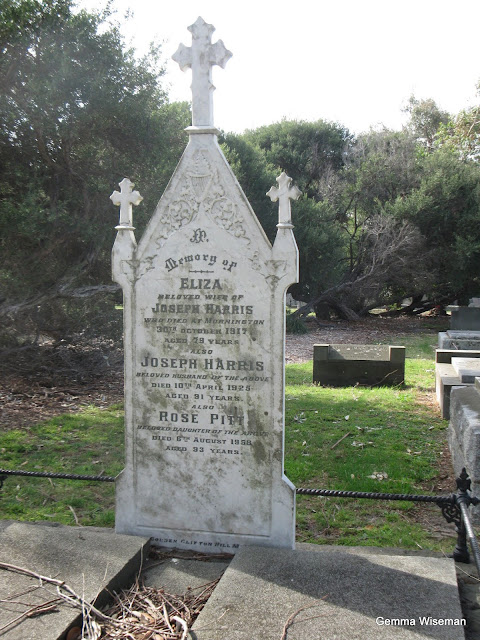 I was struck by the 3 crosses on this headstone for the Harris family at Mornington Cemetery on the Mornington Peninsula.
Not till I researched Joseph Harris on Trove did I realise what a notable pioneer he was.
Born in 1833, Bristol, England, he trained in his father's nursery.
He left England on the Morning Star in 1856, but initially tried his luck (unsuccessfully) on the Korong gold diggings near Wedderburn, a rural town 214km north of Melbourne.
(Today, Wedderburn has a Gold and Heritage Festival held round the end of February to beginning of March. Wedderburn, part of the 'Golden Triangle', was once one of Victoria's richest goldmining towns. Many large nuggets have been unearthed here in the past and – for some – continue to be discovered today.)
In 1862, he set up his own seed shop and made it a successful venture for 23 years.
A Liberal, he represented the electorate of South Yarra for some years but never accepted a government portfolio, though it was offered to him.
He was also Government nominee of the Council of Agricultural Education.
His specialty was tropic vegetation, and to study this, he travelled widely in the north of Australia.
He also made several voyages to the Pacific Islands.
For 30 years he was horticultural editor of The Australasian.
(The Australasian was a weekly tabloid newspaper from 1864 until 1941, but after 1941 adopted a magazine style and became known as The Australasian Post.
When it closed in 2002, it was the longest running picture magazine in Australia.)
He sat on many boards,
(including the Victoria Coffee Palace in Collins Street, Melbourne where he was chairman of directors)
but the strangest one involves the church.
A member of the Church of England, yet he was on the board of the South Yarra Presbyterian Church for 20 years.
In 1932, the Joseph Harris Boy Scout Park at Mount Martha (near Mornington) was opened.
The 80 acres of land was donated by Mrs H.G. Pitt (Rosa? using initials of her husband?) in memory of her father Joseph Harris.
( Not sure just who this daughter is. The former Trove article says:
Two daughters -Mrs Rosa Pitt and Mrs T.P.Long, - survive him and one son - Mr F. Harriss. The third daughter Mrs F. Vanderkelen was the wife of Mr. Vanderkelon who for several years was the Belgian consul in Melbourne.


Joseph Harris has one more unusual claim to fame. 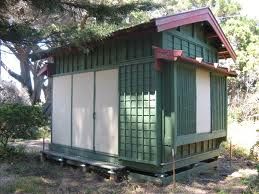 He imported a prefabricated Japanese Tea House to his holiday property at Marina, Mornington.
(The original Marina was destroyed by fire in 1915, but re-built as a gabled bungalow. Even though the property was subdivided after Rosa's death, the re-built house has been retained.
More details HERE and HERE!)
It is now heritage listed, the only known example in Victoria in a garden setting.
The tea houses are also rare in Japan. Ref: HERE

Marvelous, interesting post for the day, Gemma! Love your captures and the information you include that makes the pictures even more interesting! Hope your week is off to a good start!

what a beautiful headstone. thanks for sharing his history with us. i'll bet that tea house was really nice but probably stood out a bit. i hate the original burned down. but i'm sure the new one had vision as well. have a great day~

An interesting man, that's for sure and what a unique thing to do; importing a Japanese Tea House!
Thank you for visiting my page also. Have a great week!

I note you call him a Liberal with a capital L. I guess his persuasions leant the way, even though the Liberal Party was not to exist for a number of years after his death. One of my relations was similarly inclined way back in 1887. However, he joined the Australian Natives' Association which supported Deakin.

I also note the 'Australasian Post' which was the delight of my childhood, and the only magazine that my father religiously brought home, and which I read cover to cover. How I survived that induction I shall never know!

Don't you just hate it when women are only referred to by the name and initials of their husband! Very hard to track them down, that alone do them justice in their own rights.

Thanks for your continued excellent contributions to Taphophile Tragics, Gemma. I value your research very much.

Unusual in my experience. Lovely.

He lived a fullfilled life and the Japanese teahouse looks very cute.

What an unusual monument. Fantastic research, really interesting to learn about the people 'behind' these stones.

A cross for each of the family buried here I guess. A man determined to succeed and a horticultural pioneer indeed. I wonder if he planted a Japanese garden at Marina around his Tea House?

So interesting. I confess to knowing little of your sunburnt land. Would love to go there. k.

91 is quite old!
i like the stone with the 3 crosses indeed.
and yes, i agree with julie that you almost always see just the wife's first name, and thats it.....

He sounds an interesting man who lived such a long time! Thank goodness we do not refer to women as mainly "Mrs A Somebody" and allow them their own names now.