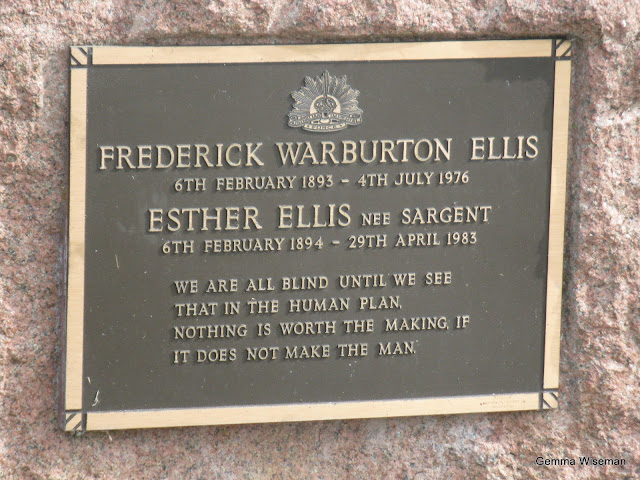 This plaque is at Mornington Cemetery near Port Phillip Bay on the Mornington Peninsula.
For me, the plaque was first interesting because the caption seemed unique, maybe unexpected on a grave.
But on further exploring, I found more intriguing detail.
Frederick Warburton Ellis belonged to the Veterinary Corps in World War I; a corps that seems to have slipped beneath the radar in most war stories.
(Though there is a book published in 2011:
Title: Forgotten Men - The Australian Army Veterinary Corps 1909-1946
Author: Tyquin, Michael)

His headstone prompted me to seek out some information on the Australian Veterinary Corps.

The Australian Army Veterinary Corps was established in 1909 and lasted until the 1940's.
In World War I, two veterinary sections were formed, one centred in New South Wales and the other in Victoria.
They were sent to Egypt, Gallipoli, the Middle East and France.
At the end of the war, there were
approximately 25,000 horses, 8,000 mules and 100 camels.
It was decided that for quarantine and economic reasons none of these animals would be sent to Australia.
Of the horses in France the best were given to British forces, other suitable horses were sold to French and Belgian farmers and the remainder sold for meat.
In the Middle East the troopers had become very attached to their horses and did not want them to be sold to those who would not care for them.
Because of this the Australians shot their own horses.
For more details on earlier history (including a role in the Boer War) see HERE!

And the caption on the plaque is an extract from a longer quote by Edwin Markham
(American poet representing social ideas at the turn of the 20th Century):

We all are blind until we see
That in the human plan
Nothing is worth the making if
It does not make the man.
Why build these cities glorious
If man unbuilded goes?
In vain we build the world, unless
The builder also grows.


Linking to Taphophile Tragics
Posted by Gemma Wiseman at 12:04 AM

That is a thought-provoking plaque and poem. And you've unearthed interesting history about the Army Veterinary Corps. Imagine shooting your own horse... ouch!

[Gemma, to clarify my comment on Julie's post, it's exactly BECAUSE Fanny was probably very needy - what with 11 children - that I say she must've been hot. I meant hot to look at, not hot to trot! Why else would TWO men agree to marry her and take on such a hefty burden? :-)

I did not know about the Veterinary Corps. Great post, thanks for sharing.

What a fantastic post. Well done on finding out so much information on both Frederick and the Veterinary Corps

I like the quote even better with reading the rest of it.

I am always impressed with how much information you uncover after looking at a grave stone. The Vet. Corps sounds fascinating and sounds like a movie script waiting to be written. It's good to see Ellis had a long life after experiencing the horrors of WW1.

Thanks for sharing this Gemma, very interesting read! Especially since I don't know anything about the veterinary corps.

Interesting corps that: the vet corps. Like the one I discovered somewhere: the camel corps.

I note the insignia of the army is incorporated into Ellis marker. This generally means he has been recognised as having died from complications that commenced during his war service, even though death was many years later. However, someone has paid extra to have Esther added to the plaque and more characters than officially allowed. And yet, there is no family mentioned on the plaque.

Nice research. I appreciate it.

how sad that they shot their horses!!