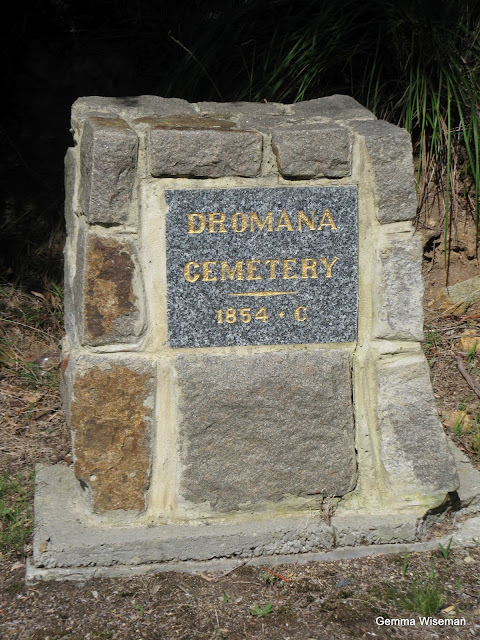 Dromana Cemetery is not far from my home on the Mornington Peninsula.
You may notice that no particular grave here has featured in any of my Taphophile Tragics posts.
(You have seen the view!)
There is a reason. 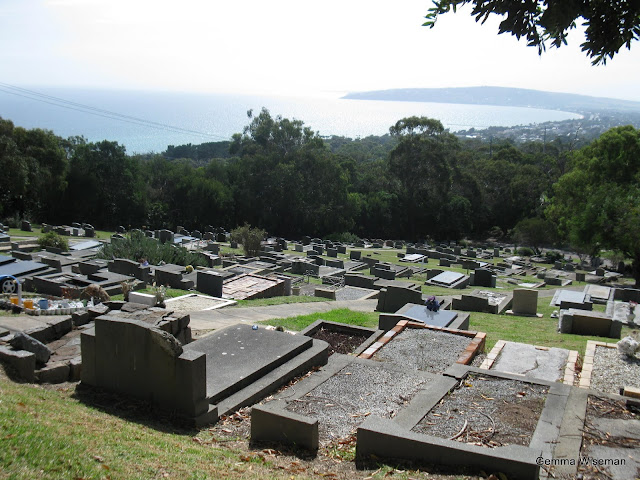 The cemetery is on a mountain, a steep mountain known as Arthurs Seat, with panoramic views of Port Phillip Bay.
The mountain is steep, so the walkways are steep and very slippery when wet with rain or mountain or sea mist.
And that is often the case. 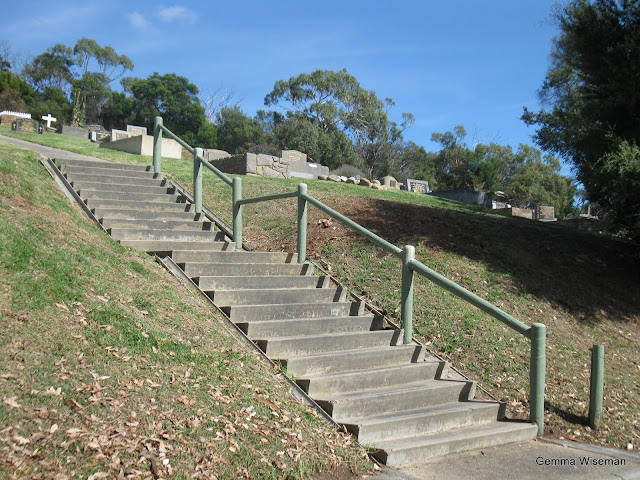 Several times I have been here and attempted to face my fear of heights.
But still I stay on the "flat" middle entrance driveway, looking either up the steps or down. 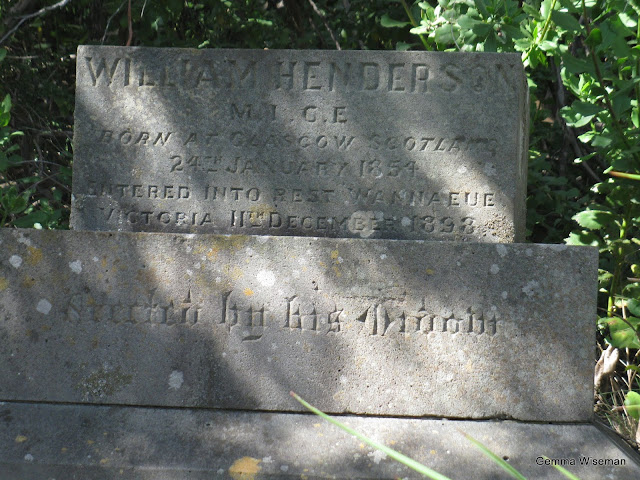 So I console myself with a few zoomed views of nearby graves.
This crumbling grave is right at the entrance gate of the cemetery.

William Henderson was a civil engineer from Glasgow, specialising in designing waterworks.
It was in that capacity he emigrated and became well known in Victoria for his skills.
Excerpt from ICE (Institution of Civil Engineers)

Mr. Henderson’s  connection  with  the Colony of  Victoria  commenced  in the year 1886,  when  he  was  engaged  in  making
reports  and estimates for irrigation projects under the instructions
of  the  Royal  Commission  on  Water-Supply.  He  was  then
appointed  executive  engineer  to  the  Victorian  Water-Supply
Department,  in  which  capacity  he designed and  superintended  the
construction  of  national  irrigation  works  in  the   district   of
Goulburn.  He  was  also  engaged in preparing  a  report  and
estimates for  a  supply of  water for  domestic  and  stock purposes
over about 17,000 square miles in  the Mallee District.  He  retired
from  the   service  of  the  Victorian  Water-Supply  Department  in
1895, and  started  to  practise  on  his  own  account  as  a  hydraulic
engineer.
Shortly afterwards, he was struck down with paralysis and died at the age of 44 in his brother's home near Dromana.
What I wonder is, where was his private practice? Dromana?
The Mallee district, where James mainly worked, is in the far north of Victoria.
Dromana is in the far south.
Was James Henderson's brother the only connection with Dromana?
Strange to find such a large memorial to a public figure who may not have lived in the area.

NOTE #1: The M.I.C.E. on the grave = Member of the Institute of Civil Engineers
#2 I believe that there is another "secret" entrance to the lower end of the cemetery from the now defunct Arthurs Seat chairlift.
More exploring to be done!

Taphophile Tragics is hosted by Julie

Click on the badge to view MORE!
Posted by Gemma Wiseman at 12:04 AM

IT Is a steep hillside for sure...
Maybe he was stricken with MS or something of that sort...

What a fabulous and interesting post. Don't worry, the height thing would have me getting wobbly legged too.

Hmmm, I wonder why so many cemeteries are on hills making it so difficult for anyone to visit the graves.

That is a steep, steep hill.
I, too, understand. I also imagine it would be very windy up there.

While the views are beautiful, it must have been hugely difficult to actually bury people there. It makes me wonder why they chose this spot for the cemetery. Your haiku does honor to this place.

Firstly, and I have been meaning to say this for a while now, I enjoy your haiku very much. I tried my hand at that for a while, but it was a bit beyond my ken.

The hillside cemetery is a corker, and reminds me of the cemetery from HK that Francisca contributed a couple of weeks back. I imagine the grave-diggers are fit young men.

I am pleased there is another entrance for you to explore. As I say, cats and skinning.

44 is not such a long life for one with so much to give. I would think engineers to quietly glory in the mnemonic MICE.

wow. it is impressive! and all the graves have such a big bedstone, or whatever you call it (i just made that word up).
i have a fear of height in the stadium of boston, it is so steep there and the stairs so small.. so i get it!
great that you did show us some pics.. :)