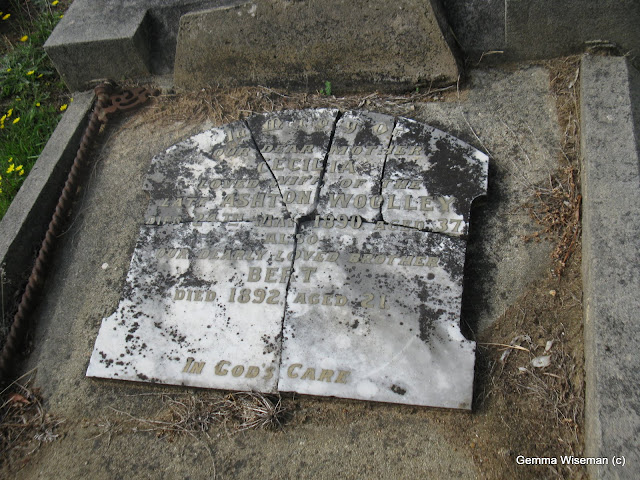 The gravestone reads:
In loving memory of our dear mother Cecilia
Loved wife of the late Ashton Woolley
Died 24th May 1890 aged 37
Also
Our dearly beloved brother
Bert
Died 1892 aged 21
In God's care
This broken headstone lies on a grave in the Tyabb Cemetery at Hastings on the Westernport Bay side of the Mornington Peninsula.

So many questions rise about this headstone:
1. Was it Cecilia or Ashton who died in 1890? The placing of the date is immediately after Ashton's name, but we assume perhaps it refers to Cecilia.
2. If Cecilia was 37 when she died in 1890, she was born in 1853. Bert was born in 1871. That means that Cecilia was a mother at 18years of age - presuming that Bert is the eldest child. Was this unusual/acceptable in 19th century society? Perhaps not. It is the children who established this headstone, not other family members.
3. We know that the 1890's was a time of severe economic depression in Australia. Does this connect and explain these "youthful" deaths, a mere two years apart, right at the time of the depression? (The Old Tyabb area (which became known as Hastings) was still evolving as a prime fishing village, unlike the hinterland exploring the viability of orchards and cattle runs.)
4. Finally, there is the condition of the stone itself. It is significantly broken and pieced together on the grave! There is no land movement at this cemetery to explain its condition and no other headstones nearby in this older area look like this. Is there another story? 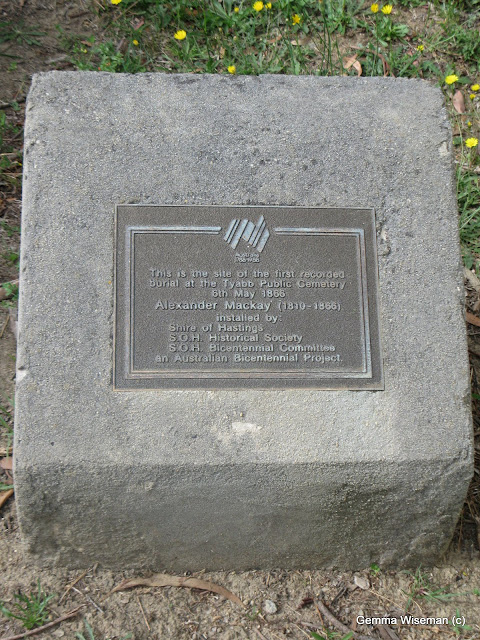 But then there is this memorial stone - identifying the first recorded burial at the Tyabb Cemetery in 1866.
Throughout the Tyabb Cemetery are a number of memorial stones representing the earliest graves here.
And the stones are part of Australia's bicentennial project in 1988.
There are few readable stones left in the era of this broken stone!
Its near completeness may mean it has been retained.

Final Comment:
Perhaps the children enjoyed more "successful" lives.
There was a Bill Woolley who was a fisherman in the Crib Point area, just south of Hastings.
A sign at Woolleys Beach Reserve states: ‘This cement cool room was built by Mr Bill Woolley in the year 1903 to store his fish on weekends. Blocks of ice were packed in the with the fish awaiting transport to Melbourne by train on Monday mornings.’ - Source
The date - 1903 - and the place suggest that Bill could be a son of Cecilia.
And there still exists Woolleys Road to Woolleys Beach.

Taphophile Tragics is hosted by Julie
Click on the badge to view MORE!

What a terrific and interesting post, Gemma! Fascinating history and it does raise lots of questions! Fascinating! Have a lovely evening!

Great post, Gemma! There is material there to fire one's imagination for a novel about the life of Cecilia! :-)

So many stories, so much to think about. ONe thing that comes to mind is that now that so many people of my age and younger are choosing cremation, this source of history and wonder will be lost to future generations. (Oh well, I guess they can always check our old blogs and facebook posts l>)

Well that well and truly gobbled up my afternoon! What fun! What a great way of presenting the information. What great things from little acorns do grow.

I have not seen any Bicentennial Memorials in my wanderings. I guess that might have been a local choice expenditure. No argument from me on that one.

Down to specifics. This headstone may not apply to that particular grave site, of course. It might have 'drifted' over the years. Good that having been smashed, it could be pieced together again.

I have seen many occasions where women of that era have married very young, as young as your Cecilia. And then die young too, during childbirth. And they had much larger families in those days ...

Having checked up on Ancestrydotcom, there is another problematic thing about the wording. I am told that Ashton Woolley (the father) lived from 1846 to 1937. So what does the plaque mean when it refers to him as 'the late'? They were married in 1871 and had 7 children, the final one being William (1889-1968) who is buried at Crib Point.

One of the sons (Ashton, Jnr) was a farmer, another (James) was a fisherman.

Maybe the bi centenary people stuck the headstone back together. The inscription does pose a few questions.
I'm hoping Julie can find an answer to your question about CJ Dennis and my Dennis family.

I would believe it was Cecilia that died in 1890 and being married and a mother at 18 would not have been unusual, however over 21 was considered more usual for marriage. But then you were considered a adult at 14 years back then

At those times people married and died young because of all kind of deseases. It is nice the stone has thoughtfull put together by somebody.

Gemma: I just posted the following on Diane's post in Brisbane ...

Yep, yep ... I read this morning about the CJ Dennis question and did the research but ran out of time to comment about it - Alannah day, you see.

So not related at all ... I will double post this to Gemma, too.