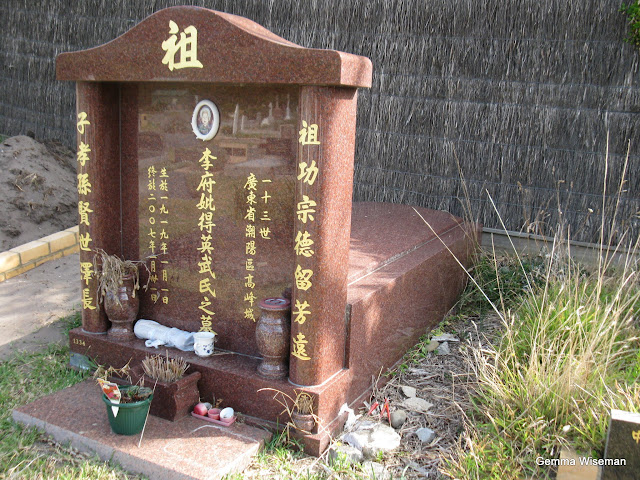 Chinese graves feature in two areas of the Sorrento cemetery, on the southern end of the Mornington Peninsula near Westernport Bay.
One group is gathered at the side of the cemetery near a home fenceline (as above) - the high side of the cemetery terrain.
Others gather on the sharp hillside furthest from the cemetery entrance.
Chinese cemeteries are often found on hillsides. The Chinese believe this affects their feng shui.
(Notice grave ornaments feature at the foot of the grave as does the headstone.)
For some reason, Chinese graves feature more prominently at Sorrento than at any other cemetery on the peninsula.
It is known that the Chinese came to Victoria in the 1850's gold rush days.
But the gold fields were at Ballarat - inland Victoria.
So why there is such a representation of Chinese at Sorrento I don't know.
Are they descendants (many of the graves seem quite modern) associated with the lime-burning trade to Melbourne - a feature of the Mornington Peninsula, especially between Rye and Sorrento - in the 19th century.
Further, Sorrento is not listed HERE as one of the overseas Chinese cemeteries and
HERE is an insight into Chinese burial customs. 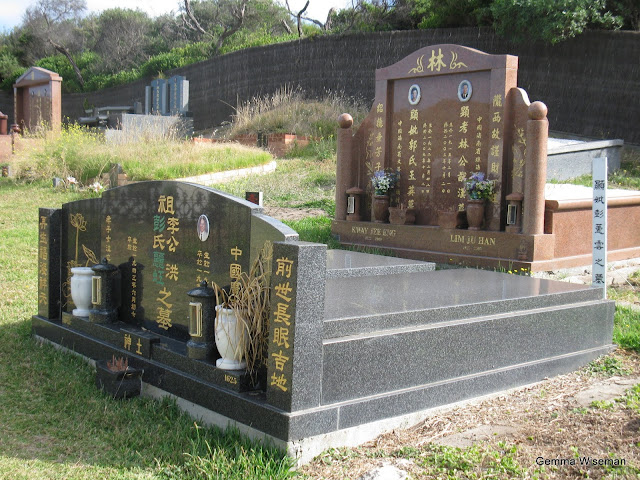 Many graves are quite wide and tend to be coloured brown or silver grey but always with gold script.. 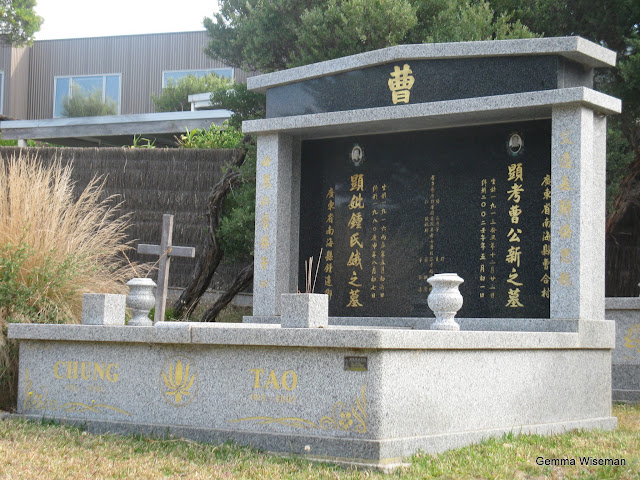 Some are built well above ground level, but these feature headstones at the back of the grave - quite unlike traditions. 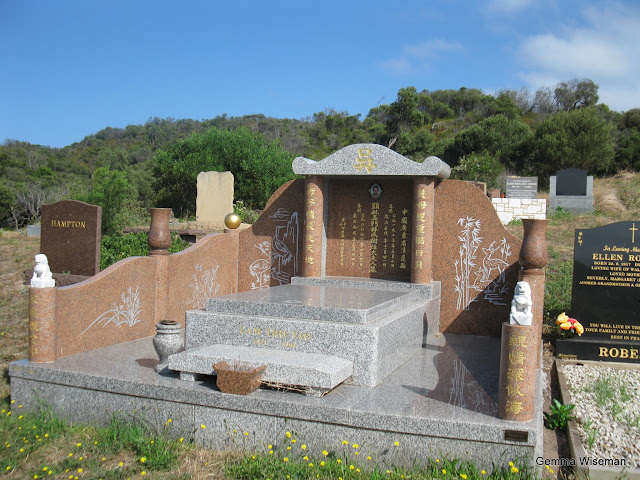 Here is one Chinese? (looks like the Vietnamese style featured below) grave on the high hillside at the far end of the cemetery.
Love the artistic, white etched scenes on this one.
(Click to enlarge + use the magnifier) 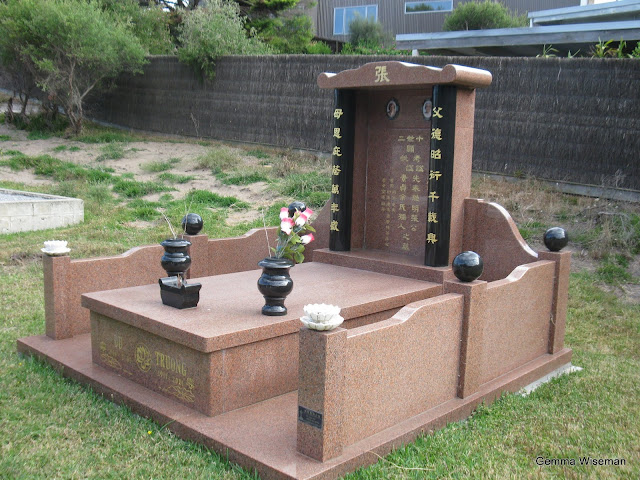 And still in the vein of cultural style, here is a grave in Vietnamese style - in the midst of the Chinese graves. 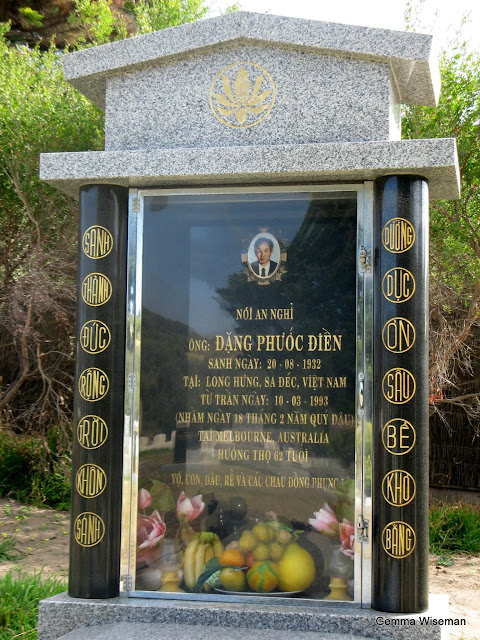 I found this Vietnamese grave also in the midst of the Chinese graves.
The platter of fruit and decorative flowers under glass intrigued me.
They looked so real.

Taphophile Tragics is hosted by Julie
Click on the badge to view MORE!
Posted by Gemma Wiseman at 4:03 AM

Great series of photos. They remind me of some of the graves of Chinese here in Oakland, though even more ornate than most of them. I do need to check out the newest section in Mt. View Cemetery, which was designed with good feng shui in mind, and apparently sold out quickly.

It seems strange to have a headstone at the foot of a grave!

They are big and impressive and a reminder of the ancestor worship that is so important to Chinese families. I wonder if Vietnamese culture has the same ethos. Probably, from the look of your photographs. There is a lot of money involved in some of these resting places. Although they are massive and very wide, they still only seem to be dedicated to an individual.

The white etched cranes are very beautiful and must have taken a while to 'carve' into the granite.

I have not delved much into the resting places of other cultures, Gemma, as often I am unable to read the language, and cannot research and understand enough. Power to you for this.

Thanks for your continued contributions to Taphophile Tragics. If you are anything like me, you are already planning your post for next week.

I haven't seen any Chinese graves, but it makes sense they would look for hillsides and think about good feng shui.

these are very elaborate....quite striking!!

Wow, they are all so beautiful.

Never seen one before. Thanks for showing and the links. Never to old to learn something

Those are gravestones I have never seen before with the chinese textes. The Vietnamese is very special indeed with the fruit.

Fascinating series of pictures, chinese graves are something new for me, thanks for posting.

ow how interesting! just this weekend i was wondering about chinese graves. i saw only one on the cemetery i was at that time, but it wasnt as nice as the ones here. the one i saw was just a regular stone, with some chinese on it.