Heart of a Poppy 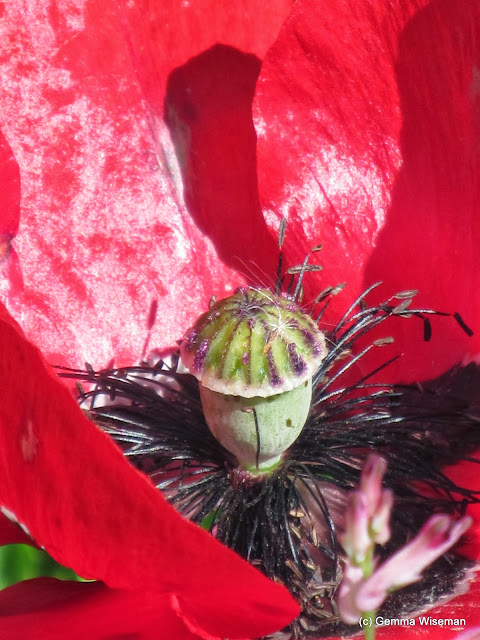 On 11th November it will be Remembrance Day.
It is the anniversary of the armistice that ended World War 1.
The day now represents all those who died or have suffered from war or conflict.
This year is not only the 95th anniversary of the armistice on 11 November which ended the First World War, but also the 20th anniversary of the reinterment of the Unknown Australian Soldier in the Australian War Memorial’s Hall of Memory. To mark the significant occasion, this year’s Remembrance Day Commemorative Address will be delivered by former Australian Prime Minister, the Hon Paul Keating, who delivered the poignant eulogy of the Unknown Australian Soldier in 1993.
- extract from the Australian War Memorial website.

Traditionally, poppies are associated with this day.
Red poppies were among the first plants to spring up
in the devastated battlefields of northern France and Belgium.
I decided that this year I would post a more intimate view of a poppy.

Such a beautiful, different capture for the day, Gemma!! I love it!! A time of remembrance it is indeed!! Thank you for sharing!! Hope your week is going well!!

Wonderful shot of the poppy.

Beautiful Gemma... I know that poppies are always associated with Armistice Day (or Veterans Day as it's now known here), but I never before knew the reason. Thanks for sharing that info. (I do remember learning the Flanders Field poem, so I guess I should have known....)