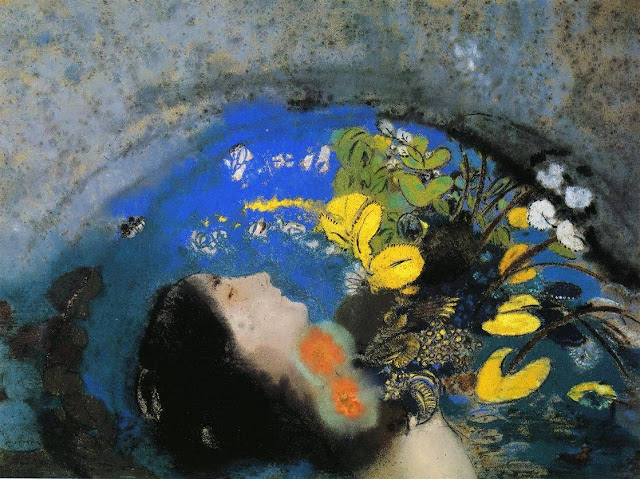 NOTE: For those who think I have re-invented the Ophelia story, I have not.
Instead, I looked at Redon's image and thought he seemed to capture the shape of a rain puddle.
And that's where my idea began.
As if, like a mirage, (my opening word) the innocent face of Ophelia appears in the rain puddle.
Like a brief, legendary moment has surfaced, re-incarnating her final moments, until the sun dries up the puddle, and she is gone once again.
Ophelia's story remains intact.
Posted by Gemma Wiseman at 7:08 AM

I kept thinking of you in Australia reading this - of relentless sun, or mirage, of reflections in puddles. Very nice. k.

Shakespeare's Ophelia drowned, but I see you knew that! I can relate to thinking of the sun as a water thief!

(Visiting from Poetry Pantry, and glad you are joining in)

Such a lovely interpretation of the painting, Gemma.

i love that painting. and your words... that last stanza... great~ such a tragedy, her death. have a wonderful night~

Excellent response, Gemma. I love the sun's strength at the end.

Beautiful words for a stark theme.

Yes, you grasped that ephemeral moment with emotive precision. Wonderful.

I can picture the swiftly evaporating visage...nicely done.

Poignant lines on the Ophelia story...

I think you have painted your own version of Ophelia with your words..