A Little of the Benton Story 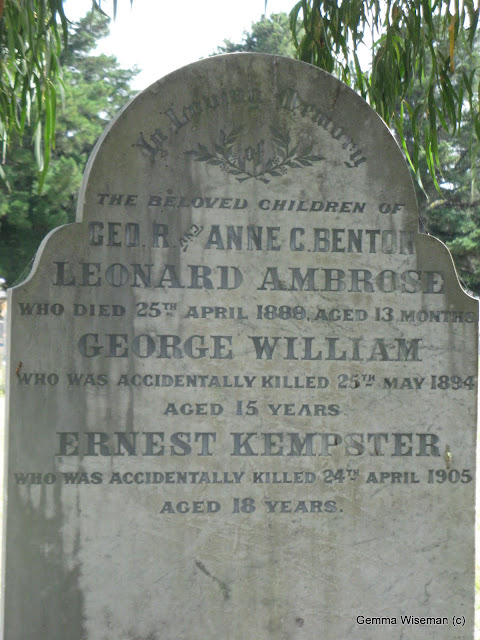 This headstone is at Tyabb Cemetery, Hastings on Westernport Bay, Mornington Peninsula.
The Bentons were a famous pioneering family of the Mornington Peninsula.
(Famous maybe - Benton's Square, Benton's Road, Benton's College - but family detail is difficult to find.)
Benjamin John Benton completed Mornington pier in 1857 (for more details, click on the photo), but George, this son of his second marriage (one of 7 children) is less well known.

Source: Benton Family
(NOTE: The Flood family tree records John Flood as marrying "Martha" Elizabeth Benton in 1888.)
Benjamin's family (from England) is recorded as settling at Mornington on Port Phillip Bay c.1851, but George, (Geo R on the headstone but also listed as George B ) once married, seems to have settled at Hastings on the Westernport Bay side of the peninsula.
And yet there is no apparent evidence of a headstone nearby for George or Annie.
The Tyabb Cemetery database says that they are here - stating that George died in 1920 and Anne in 1924. It also says that they had a daughter Anne Caroline who died in 1949.) 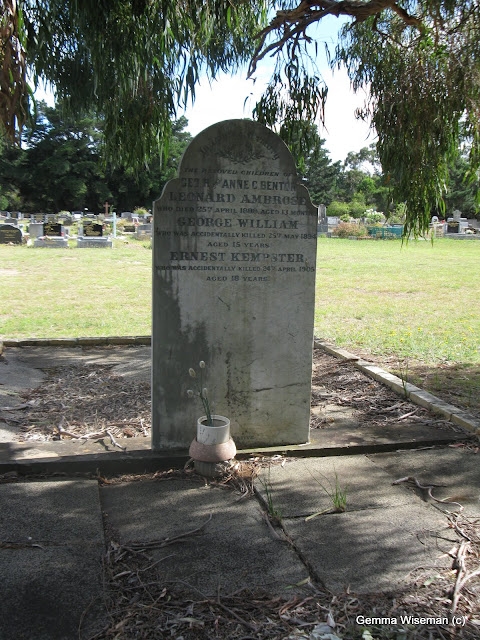 Just this one grave - paving style - for three children.
The other side of the headstone appears blank!
(I was wondering if it could be faded being in more direct sunlight.
Or, was another headstone once there - back to back?
What intrigued me about this headstone was that two children were accidently killed. They were only teenagers.
I found details of one "accidental death".

ARTILLERYMAN'S DEATH
An inquest was held at the Morgue yesterday, by Mr. Candler, the city coroner, into
the death of Ernest Kempster Benton, who was killed by a falling flagpole at the Bittern Artillery Camp on Monday last. Evidence was given to show that two horses, which were tied to the flagstaff, became restive. Benton went up to quieten them, but they pulled back, and dragged the flag-staff down on his head. The guys were not intended to hang horses on. Benton was on duty at the time the accident occurred. The coroner returned a verdict that the injury had occurred whilst deceased was in the the execution of his duty as a driver, and that it was accidental. - The Argus 29th April 1905

Further Notes:
A memorial has been placed at Tyabb Recreation Reserve Shire - Hastings Historical Society Marker No. 3.
Memorial to Ernest Benton of Tyabb and a member of the 6th Battery A.F.A. who sustained fatal injuries in 1905 when releasing a horse tied to a guy rope of this flagpole, then on the Hastings foreshore at the Battery gunshed.
Placed in 1984 by his nephew, George Benton

Taphophile Tragics is hosted by Julie
Click on the badge to view MORE!
Posted by Gemma Wiseman at 4:03 AM

Fascinating post and history for the day, Gemma! Hope you have a wonderful week ahead!

Ooo ... wow, Gemma. You have excelled yourself with this post. I adore the detail and the research you have undertaken. More power to you!

It is wierd the effect that the 'death by flagpole' had upon me. I chuckled. How inane of me. But I do like that there is still an intact reference to the death at the flagpole.

Of the three children noted on your marker (Leonard Ambrose, George William, and Leonard Kempster) only the flagpole lad had an unusual second-name. Probably a family name, perhaps of his mother, Anne C. Benton?

Ooo ... just done some calculations. I wonder if Leonard and Ernest were twin sons. They both appear to have been born in 1887. If Leonard was born in the March, it does not leave sufficient time for Ernest to have been 'gestated'. Food for thought.

I find that sadly interesting: that there is no apparent marker for the deceased parents. Perhaps by then, the family had gone downhill due to grief over its losses. Perhaps only 'Anne Caroline' was left and she was poor. Does give us a clue as to the mother's middle name though.

What a fascinating post, Gemma. I take my hat off to you.

Very interesting post, Gemma. Great to find out about local history through the prompt of a name...

Life was hard back in the "good old days". And its a little scary how history kind of disappears. You did a good research job.

Julie brings up some interesting points. Good on you for all that researching.

Goodness me, that's some accident. Fascinating piece of history.

That's a lot of grieving for one family to bear.

I am so impressed with your research.

how sad! so young!

That is really sad. I always wonder when the stones were put up. Apparently the family waited until the second boy died.

I guess that should be third boy. I wonder if there were earlier stones.

Sad for them to lose three children so young. But not uncommon in those days to lose children, alas.