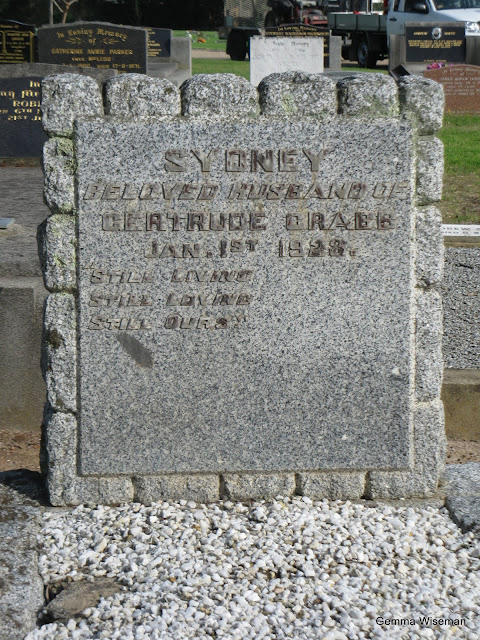 At first, it was just the simple but creative framing of this headstone at Mornington Cemetery on Port Phillip Bay which attracted me.
But then I noticed that there was no birth date for Sydney Crabb.
There was no mention that Jan. 1st 1928 was a date of death.
Perhaps that explains the words beneath the date:
Still living
Still loving
Still ours
Trove revealed that Sydney George Branstone Crabb was a Lieutenant Commander in the Royal Navy.
Rootsweb revealed that he was born in 1884 and was one of 6 children born to Charles and Maria Crabb in England.
He married Gertrude in England.
They married on 3rd December 1914 in Dover.
(On the marriage certificate, Sydney's father Charles George is listed as retired from the Royal Navy.)
They had two sons.
One was Gordon John Branstone Crabb C.B.E.  D.S.C.
He was born in 1917 in London but came to Australia in 1920.
(That means Sydney came to Australia in 1920.)
He attended Melbourne Grammar.
During World War II, he served on the HMAS Napier as a lieutenant.
In May 1941, this Australian destroyer was one of several ships which played a major role in the evacuation of Australian troops from Crete.
In 1973, Gordon was listed with the navy as Rear Admiral.
He was on the naval board as Chief of Naval Supply and Works.
More incredible details of his service record till he died in 2001 are HERE!
The other son, Charles MacVean Branstone Crabb, competed in the 1933 Head of the River for Melbourne Grammar.
I can't seem to find more on his life.
It seems that "all-things-water" are in the blood of this family. 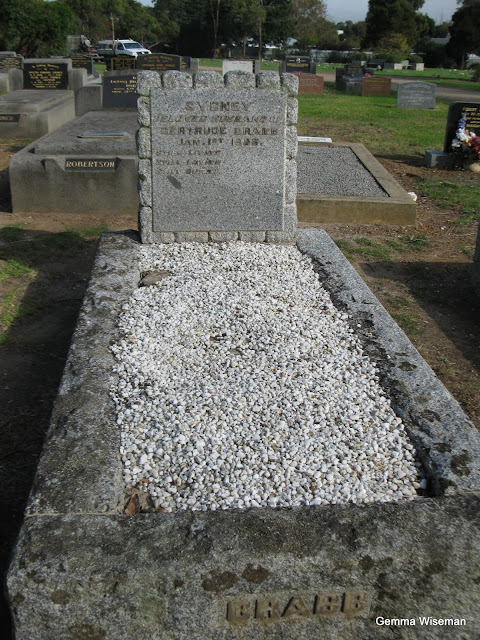 The framing of the grave seems old, but the headstone seems far more new.
Is there another story here?

Linking to:
Taphophile Tragics
Posted by Gemma Wiseman at 7:39 AM

i really like the unique grave framing here. what a nice haiku/ tribute to his passing. have a great night~

it is sad that someone who reached the rank of Lt-Commander in the Navy has an unfinished grave marker.

Quite a mystery you have found here. If 1928 was when he died then he was only 44 and had been married for 12 years. Could have left a heart-broken widow who kept the headstone looking as new.
So many possibilities for you to research with this one.

What an interesting post. The headstone could have been cleaned recently, restored or even replaced at some point.

I would've been attracted to the headstone too. But what a mystery...