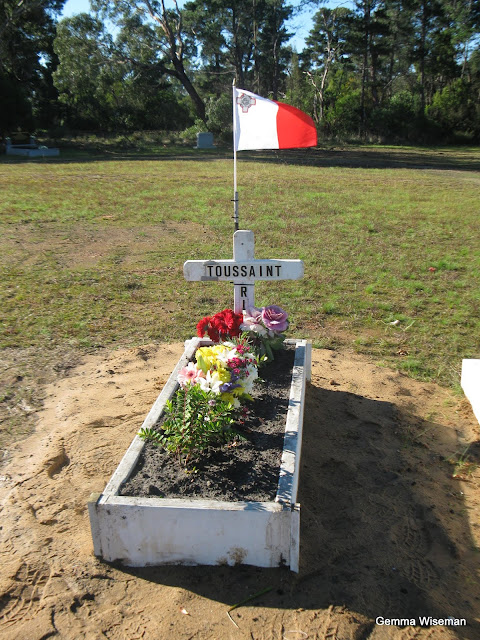 This humble grave is at Crib Point Cemetery on the Westernport Bay side of the Mornington Peninsula.
It is simply identified as Toussaint - with no dates.
The only small clue is the flag. 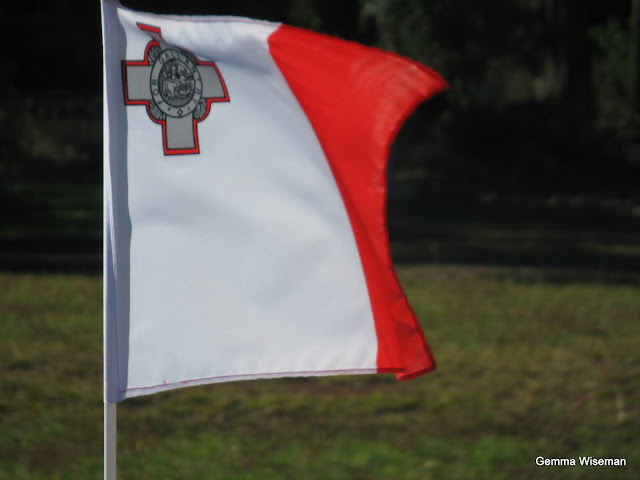 This is the flag of Malta.
It was not adopted till September 21, 1964 when Malta gained independence from Britain.
But the flag existed prior to that date.
King George VI of Great Britain awarded the George Cross, a military award for gallantry, to Malta in 1942, in recognition of Maltese heroism during the early years of World War II.
The left top corner of the flag features a King George Cross outlined in red and reads FOR GALLANTRY.

So here we have a French name connected to a military award connected to a national flag and all set in a small Australian cemetery in a humble grave marked with living plants.
Mystery!!!!!

NOTE:
Toussaint and Haiti
- Francois Dominique Toussaint was leader of the Haitian independence movement during the French Revolution. He emancipated the slaves and briefly established Haiti as a black-governed French protectorate.
Toussaint and art
- Christopher Toussaint is an award-winning documentary film and video producer/director, cameraman and editor. Currently he is owner of Free Spirit Productions in Santa Monica, California and the Director of Transvision, a spiritual society devoted to conscious media.
- Allen Toussaint - was inducted into the Rock and Roll Hall of Fame in 1998.
- Chris Toussaint (Melbourne) - is a writer, editor and artist. He has published feature stories, interviews, reviews and editorials in newspapers, street press, magazines and trade journals. His commercial work has appeared in advertising and marketing. Chris has qualifications in Arts, Media, Communication and Literature. He is managing director of 21D, a literary and art magazine.

What a wonderful, mysterious and interesting post for the day, Gemma!! Hope your week is off to a great start! Enjoy!

It's a mystery that someone is remembered...but not remembered. Curious indeed.

It's a nice mystery and it has us thinking about who could be in that grave.
Toussaint in French is la fete de tous les saints, in English All Hallows Eve and All Saints Day. Like spooky Halloween . . .

i'm so enjoying your grave posts. each one seems so unique to it's occupant. and such mysteries that follow some are all the more intriguing. have a great night~

What a wonderful little myster. B eautiful picture.

It is a mystery with no dates. It looks rather new, maybe a stone with further information will come later.

the flag seems to be attached in a permanent way. and looks in very good condition, so I am guessing this is a new-ish site? interesting clue!

Interesting find, those living plants suggest frequent visits to the grave. You might encounter a relative and a chance to find out more!

Interesting for sure. I thought of Haiti at once (as you did)... wonder how common the name is actually.

It does look very new, and very hand done.

And very humble, when it has no need to be humble.

I agree that this seems to be a newer grave. Maybe the flag helps everyone find the spot?
Thanks for the explanation of the flag, too. There is always a story, though it may not always be so obvious.

but i do see a lot of footsteps around the grave!