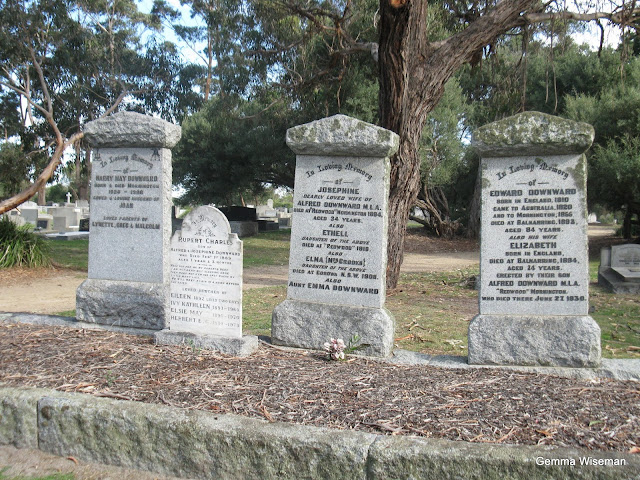 The Downward family - pioneers of settlement on the Mornington Peninsula - feature prominently at Mornington cemetery.
Yet only one seems to reveal some internet detail.
The first mail services to the Western Port side of the Mornington Peninsula did not commence until 1858. Prior to that mail was delivered by horseback to either Schnapper Point (Mornington), Dromana, Sorrento and Cape Schank. From 1857 a coach ran from Mooroduc to Sandy Point, bringing mail, but the first contract to deliver mail to the area began in 1863 when mail was delivered twice a week by horse back to Hastings from Schnapper Point. In 1866 this contract, awarded to Alfred Downward, was extended to Balnarring as well.
- extract from Hastings District Heritage Study
Alfred Downward was a long standing member of Federal parliament.

Alfred lived at the large property of Redwood - so named because of the many redwood gums - Mornington.
Initially, he worked on his father's sheep farm at Balnarring. From 1874 he ran sheep on his own selection at Tubbar Rubba (also known as Tubbarubba, just outside Dromana, where a gold bearing reef was discovered in the 1870's but shafts were first struck 4 years earlier) and took a great interest in land settlement and development of the Peninsula.
In September 1895, Alfred was one of 13 shareholders forming the Tubbarubba Gold Mining Company.
(No significant finds were ever recorded!)
Member of Flinders and Kangerong shire council for 25 years, president 1890-1892; also councillor and president of Mornington shire.
These 3 shires covered the peninsula.
He was MLA for Mornington, representing the Country Party, from 1894 till 1929, just before his death in 1930.
In that time he held a range of impressive portfolios.
More details HERE!

Trove records a number of newspaper comments.
Alfred was the oldest member of the Legislative Assembly when he retired.
He was one of the largest landowners on the peninsula and was a leading sheep breeder.
His son Herbert (1880-1973) represented the Country Party for Mornington after Alfred's retirement.

In the mists of time
Some notable pioneers
Become elusive

I love "in the mists of time".....and also the way cool names of all the places:)

I have found too, that prominent names seem to disappear when looking them up on the internet, and often only one can be traced. He sounds a very enterprising man. (with the exception of the gold)

I love reading the history of families who contributed to the development of the areas were we live. Mr. Downward sounds like a fascinating individual who gave much of himself to his country. To go from a sheep herder to a member of parliament is remarkable. The tombstones are wonderful. Such an interesting post. genie

Most interesting.
Sydney - City and Suburbs

Gee, the Mornington Peninsula must have been a rugged place back then.

He lost both his wife and his mother at such young ages. I wonder if all the heavy community engagement was to fill a void?

He looks a bit like Alfred Deakin. Their tombstones are very Presbyterian - meaning plain and simple with no nonsense, or OTT sentiment.

Wonderful headstones and such an interesting story behind them. Great picture.