Captain James Logan-Bell and Beyond 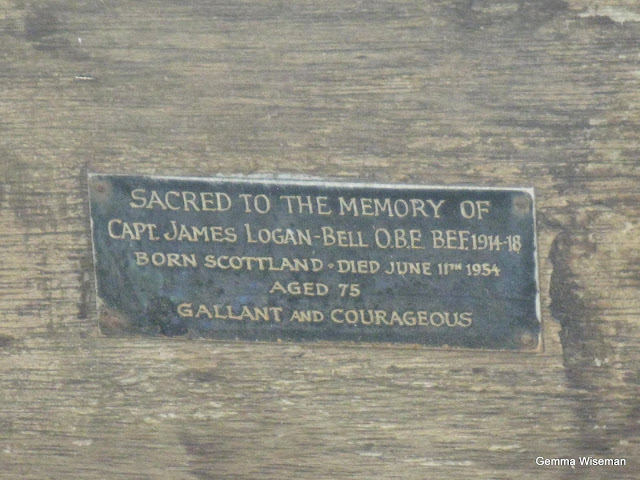 A simple headstone at Sorrento cemetery on the southern end of the Mornington Peninsula,
but it signifies and leads to so much.

James Bell (founder of the famous Scottish printing house of Bell and Bain in 1831 and one of the oldest printing companies still operating in Scotland) was my father's Grand Father. My father's name is Captain James Logan-Bell , OBE MID, ASC, 1914 to 1922, Royal Horse Artillery, First Cavalry Division, BEF. who emigrated to Australia in 1924 and enroute met and fell in love with my Mother Ethel Lilian Shelley, private secretary the Caterer to the House of Lords, the De Vere Group of Hotels. They married and settled down in Melbourne and surrounding districts. I was born in 1935, an only son. Both now lie buried in the picturesque and historic pioneer cemetery in Sorrento, near where our Prime Minister Harold Holt mysteriously drowned at Cheviot beach on 16 December1967. I live with Merlyn my wife and younger Daughter Christina here at Carnegie, an attractive inner Melbourne suburb. Merlyn's family were pioneer miners, the Trembaths from St Just, Cornwall who originally settled in Bendigo at the time of the Victorian Gold Rush. Her Grand Father grew quite wealthy and established a stock broking business, his Grand Son Robert still practises with a family broking firm.
Extract from HERE by James Logan-Bell, born in 1935, an only son.
More from him HERE

In 2007, the Liberal Party awarded this James (Jim) Logan-Bell a certificate of appreciation
In recognition of more than ten years continuous service in an executive position for the Liberal Party in the Federal Electorate of Goldstein
He has been secretary of the Glen Huntly branch of the Liberal Party and Treasurer for the Victorian Snowsports Association.
He is keen on creating programmes representing opportunities for indigenous and low socio-economic communities to enjoy snowsports.
Perhaps the interest in indigenous welfare stemmed from his attendance of Wesley College, South Perth, Western Australia.
During the 1960s, the Methodist church had assumed responsibility for the Mogumber Mission at Moore River and two boys were provided with places as boarders at the school. Dean Collard and Trevor Holmes were the first Aboriginal students at Wesley College, some four decades after the opening.    Ref: HERE
There is a strong indigenous representation now at Wesley and scholarships are available for this group.
ODD FACTS:
Jim supplied a 1951 sketchbook for the Wesley archives. Is/was he an artist?
Mr Jim Logan-Bell's painting of a view from Prince Charles' Australian school, Timbertop, was presented to Charles and Diana at their wedding. SMH Nov 3, 1985
NOTE:
BEF = British Expeditionary Forces
ASC = Army Service Corps - before 1918; RASC after 1918
MID = Military Intelligence Detachment 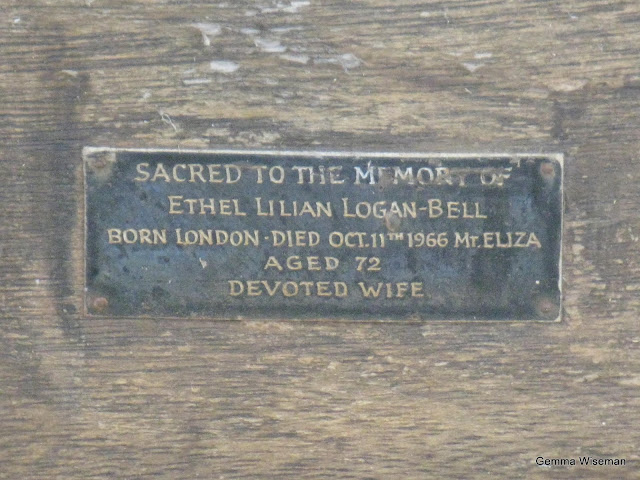 Note the 15 years age difference between husband and wife.


Linking to: Taphophile Tragics
Posted by Gemma Wiseman at 4:03 AM

Such interesting lives, Gemma! Very interesting. I am happy to know there is now strong aboriginal representation at Wesley College.

There was a time when your name meant everything, without a picture ID you had to promote and carry yourself in a certain way. Lovely monuments to your family and a lovely story to go with them.

"an only son" sounds rather wistful.
and perhaps a bit of a burden, especially in carrying on the family history.

We owe much to our Scottish forefathers.

Such a simple stone for a family that were anything but non-descript.

You had me flummoxed with the first paragraph... thought it was you writing, Gemma... then got to 1935, then only son... huh? LOL! Well, as the only son with "only" a daughter, he was the end of that family line. Although I don't mind BEING a devoted wife, I don't think that's what I'd like to see on my headstone (not that I'll get one) to summarize my life. :-)

Great research, over the generations this family lived through interesting times and made the most of them.