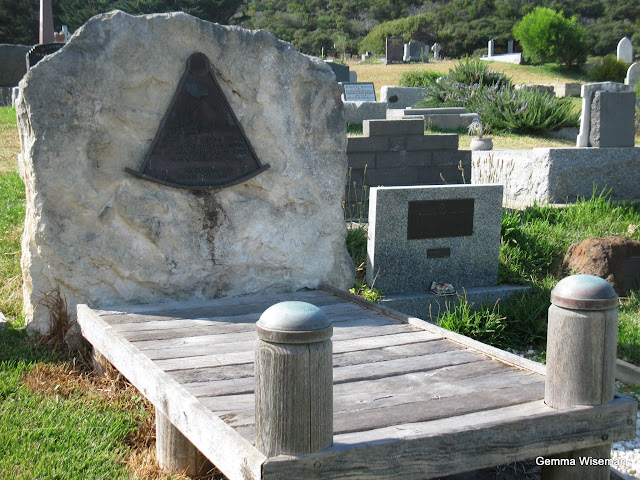 A most unusual grave shaped as a pier.
This grave is at Sorrento Cemetery on the southern end of the Mornington Peninsula, Victoria.
I was not only attracted to the unique style of the grave, but also the less common surname of Sturzaker.
I was sure that I would find some information about this man.
All I found was that the Sturzakers have strong English ancestry.
The surname has Anglo-Saxon connections - not German as the name sounds.
Many also lived in the north of Tasmania - especially Launceston - some lived in northern Victoria - Bright, famous for its parade of Autumn colours - and a couple lived in Darwin in the Northern Territory.
For more details see HERE and HERE! 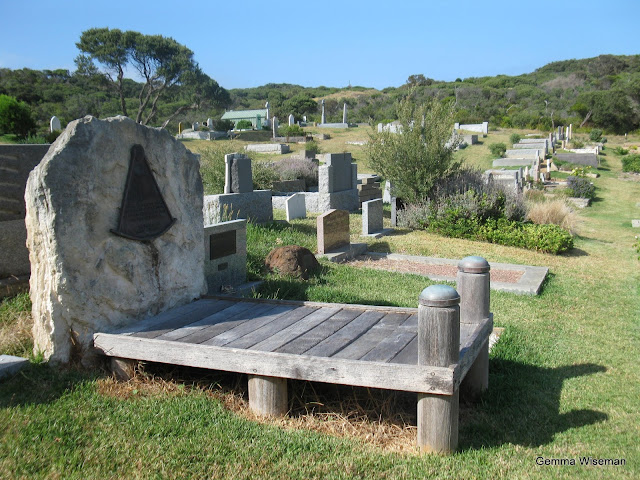 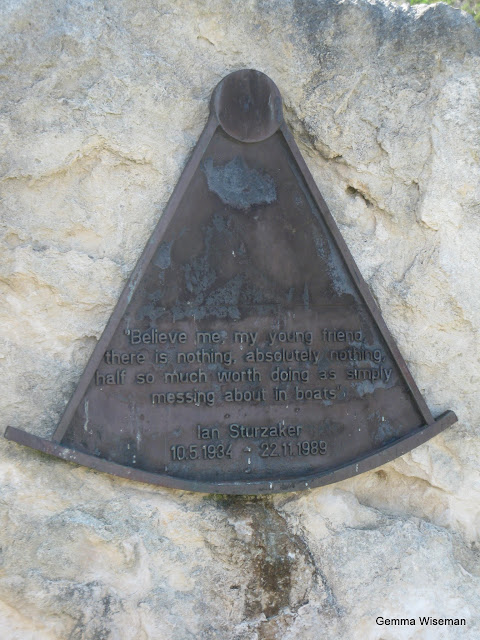 Believe me my young friend
there is nothing, absolutely nothing
half so much worth doing as simply
messing about in boats
Ian Sturzaker
10.5.1934-22.11.1989
NOTE: This is a quote from Kenneth Grahame's The Wind in the Willows

Some interesting extra notes:
Currently, Geoff Sturzaker is a fisherman in the Portland area of coastal south west Victoria.
He is mentioned in Rex Hunt's 2008 fishing report HERE and the Fishing Monthly HERE
There is a photo of bearded Geoff with a large tuna HERE!
He looks of an age that could make him Ian's younger brother or even Ian's son!

Taphophile Tragics is hosted by Julie
Click on the badge to view MORE!
Posted by Gemma Wiseman at 12:04 AM

Fascinating post for the day, Gemma! Terrific captures and wonderful words as always! Certainly a different grave/headstone! Hope you have a great week!

That's really interesting and I was going to say a fun post, but that's just wrong! Still that gravemarker is wonderful and really does tell us something about the gentleman. And it is one of my all-time favorite quotes -- I printed it out to frame for our boat, but haven't found a place for it yet.

Interesting post. I have wandere around this cemetery and foun it a fascinating place, right next to the beach too.

When I read that quote I thought it was very familiar. I can almost see Ratty joining him on his gravesite boat!

Fascinating! What fun that a grave could give so much pleasure to others, unknown, and yet understanding of a man's passion.

watching the Oz Greatest loser, today, they are sailing .

What a thoughtful and appropriate marker for a keen sailor. I have seen local graves (Yorkshire & Lancashire UK) with the surname Steresaker and Styrsacre which may have evolved into Surzaker. Great picture looking over the pier towards the rest of the cemetery.

I guess like the pharoah who was buried with his armies, taking ones boat along for eternity would be quite nice!!

Gemma, I read your post a couple of days ago now, but apologise for not leaving a comment. Instead I think I went off to try to find this Sturzaker fellow. I found an Ian who was married to a Joan but could not confirm dates for some reason. However, I was not keen on that Sturzaker because he was a banker from Toorak on one of the Electoral Rolls.

I really like the look of this grave marker. I do worry about white ants though, but also about the arsenic if it were made from treated pine. Oh the worries of modern society.

Another wonderful post, Gemma. How do you do it, and with such a limited number of cemeteries from which to choose.

Fascinating post. My dad loved messing around in boats. I really like the pier over the grave.