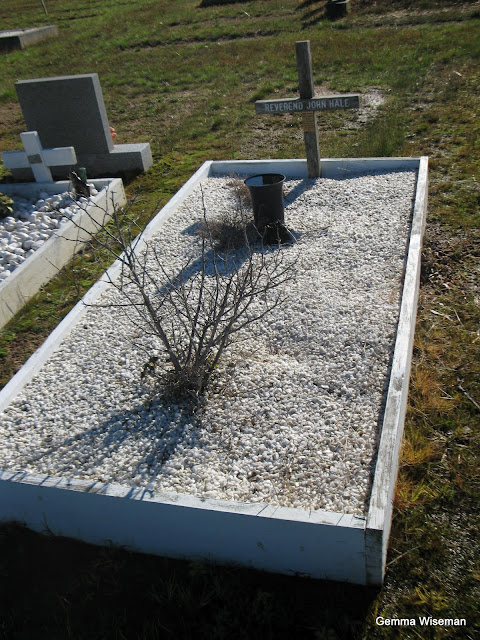 A grave at Crib Point Cemetery on Westernport Bay, Mornington Peninsula.
Simple woods frame it like a raised garden bed of white pebbles and maybe a flowering shrub in Spring.
And a simple wooden cross. 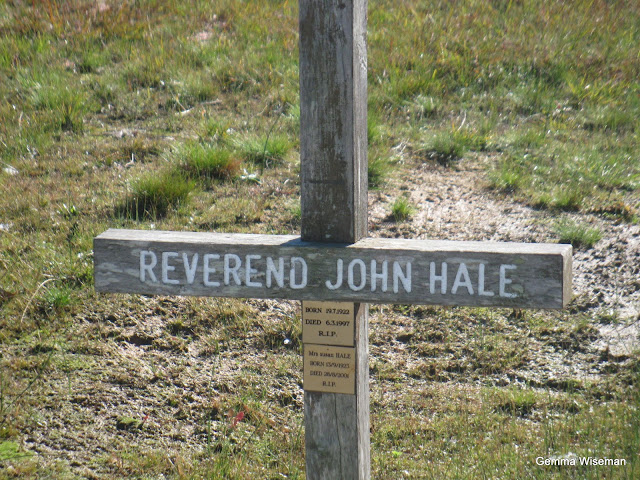 I was surprised to read that this was the grave of Reverend John Hale.
A post on this man I intended to publish weeks ago.
Each week I have searched for details of his life, even of his church.
But each week, there has been complete silence.
There is just the tiny gold plaque of his life dates and below, that of his wife Susan.

So now, the story must be an imagined one, revolving around why.

At nearby HMAS Cerberus, there is a Roman Catholic Chapel, Our Lady Star of the Sea which opened in 1948, followed by St. Mark's Chapel in 1954.
I would expect this institution would record some connection.
That leaves the Uniting Church at Crib Point.
An image of it is HERE!
It appears to be a humble, small building, clearly only able to support a small congregation.
Somehow, I get the feeling this may be Rev Hale's world.

Perhaps he was a man of the people who sought no lasting public glory or memory except for those touched by his presence while he lived.
That is how I would like it to be.
That is one story.

Yet I cannot help but make some association with another Reverend John Hale.
He was a young Puritan Massachusetts pastor during the witch trials in 1692.
At first, he supported the trials and then changed his mind.
(And there is a Susanna in The Crucible version of these trials who is under Abigail's spell!
The mind is probably travelling too wild!)

I wonder which story reflects our Reverend.

A man of secrets
Silent elusive footprints
The Reverend Hale

Just a simply yet striking grave for such a mysterious man.

Interesting post! I haven't seen grave markers like this before (I live in the Chicago area), and I think it's interesting how it's a slightly raised bed, with gravel. :)

For some reason, I think I would expect a Rev'd (or equivalent) to have a less humble grave and marker. But then maybe he was just a man like any other.

I love your flight of fancy. A budding Arthur Miller!

The simplicity of the memorial is striking. Reverse symbolism.

I often find simple memorials, but they never seem to make it into my story. I shall have to rectify that.