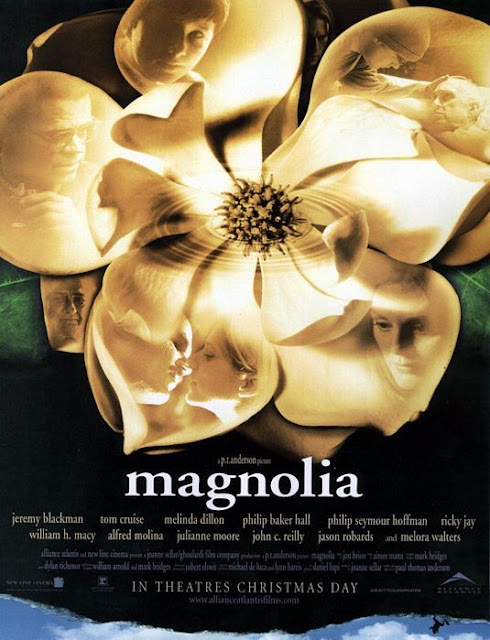 
Personal chaos
Released to the whims of winds
Magnolia time


NOTE:
Magnolia, released in 1999, is a movie epic which exposes 9 lives connected by tensions.
A key scene takes place on Magnolia Boulevard.
Magnolia is a typical San Fernando Valley boulevard, wide, straight and long. From its easternmost end, at the foot of the Verdugo Mountains, it travels more than 10 miles, bisecting neighborhoods of postwar ranch homes one mile and gritty commercial stretches the next. Ref: Los Angeles Times
The writer/director, Paul Thomas Anderson, had the title of "Magnolia" in his head before he wrote the script. "As he started writing, the script "kept blossoming" and he realized that there were many actors he wanted to write for and then decided to put an epic spin on topics that don't necessarily get the epic treatment."
He also did research on the magnolia tree and discovered a concept that eating the tree's bark helped cure cancer. Ref: HERE
AND
More on the film's title HERE!

Awesome Gemma. What a wonderful set of haiku on Magnolia. I loved reading it again and once again.
I am glad that this weeks prompt gives inspiration.

As always, your haiku is a delight to read. It's amazing that the director found the bark can cure cancer. I wonder which species of magnolia and whether there is scientific proof on it.

Great haiku Gemma! I stumbled on this movie title when surfing through Wiki and included it in my posting. But I had less details written in! Great write, Ma'am!

I like the way each stanza links to the next through your selective repetition. Thank you for sharing your work on Real Toads.

A terrific take on the promt Gemma!

Great topic for a poem~your explanation adds depth to the poetry.

you really got the movie and play down

This triptych weaving back within itself is a really effective device, and you use it with veracity.

My favorite flower! And now I live in a climate that I get to see and smell them often. I will have to find the movie... thanks.

I wish Chaos could easily be "released to the whims of winds"...