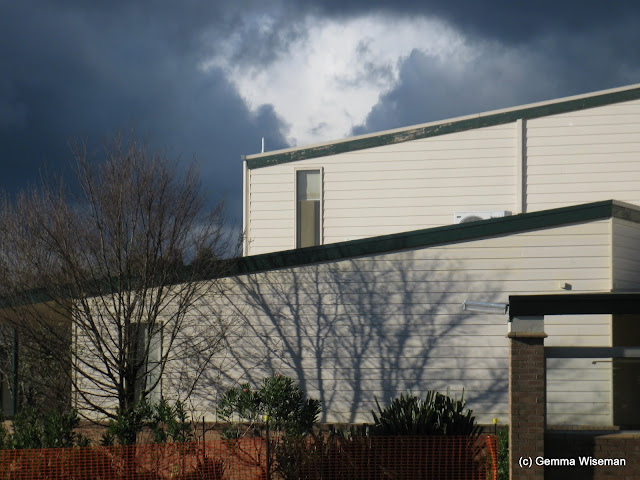 NOTE - This is my second attempt at a huitain.
(My first attempt was A Monk's Tale for Real Toads.)
It is a poem in a single Ballade stanza.
The verse form was most popular in the 16th century and was often used for epigrams in the 18th century. One source suggests the huitain may have begun in Spain.
The basic layout is:
Line length: 8 (French) or 10 (English) syllables
Rhyme scheme: ababbcbc
Number of lines: 8

**No websites seem to explore the association with death as an "undertow" theme in the huitain,  even though I have observed that many old examples of huitain seem to do this!
I have not noted this as a feature on my dVerse post, but I have acknowledged this theme's presence in both my huitain by suggesting the death of some old life.

thank you for a great article at dverse...this was a very fun form to play with...enjoyed both of yours...really neat way to the look at the shadow play in this one & the trees....

It's fun to try new forms. All the more interesting when only 8 lines are required. Thanks for dropping by Gemma! Wonderful write!

Thanks for your inspiration Gemma. Not one to regularly write to form I obtained much pleasure from the huitain.

Very well done article and great job with the form. I especially like the "yesterday's bones in new lights." It's a deceptively difficult form, which you handled really well. k.

I love the way you used this form. I struggled a bit. If you did, it doesn't show at all.

Gemma, first of all..thanks so much for hosting over at dVerse - really a wonderful article you wrote up for us..enjoyed your poem as well..such an intriguing form as due to the shortness you have to choose the words really wisely...

Very difficult prompt on dVerse, but well worth it! I love your view and the imagery!

I love this...you worked with the form beautifully and thank you for bringing it to our attention over at dVerse. I had fun giving it a try.

I really enjoy the imagery and words you conjure here. I especially like "Like yesterday's bones bathing in new lights" and that last line. Thanks for teaching me a new form at dVerse!

Thank you Gemma - this form and your fine article prompted some of the best form poems I've read on formforall. It was very gracious of you to do it and I appreciate it so much!

Loved this poem satisfying the requirements of the poem while exploring a beautiful metaphor in a personal way. Exceptional work.
Thank you!

I LOVE this huitain, perhaps my fave so far of your writing. Wonderful accompaniment to the photo.

Beautiful, Gemma. Despair not. Summer is just around the corner. Thanks for the huitain lesson. I had fun with it.

Very vivid, sharp picture, with that undertone of loss and change--thank you Gemma--I love this form.

Thank you for introducing us to this form. I can feel the mournful winter sea in your poem. Beautiful.
Great pic.

I loved the mood, it was eerily beautiful. It reminds me so much of the mangroves here, where the bush meets the bay. Just beautiful imagery!

Huitain, thanks for the lesson. It's never too late to learn new things...
Your wall looks like a painting of a...tree! :)
Happy Sunday!

Interesting writing form ~ I had never heard of it before. Thanks for the lesson.

Quite a feeling of loneliness you convey with your words. What you have written is indeed beautiful.

Hi Gemma! We love your huitain! You always put such beautiful feeling into your words to compliment your pictures!!

This concatenation of words--"yesterday's bones bathing"--conjures up delightful skeletal images in my mind! I think I'll dance with that image--and the bones--for a while!

This is a wonderful shadow - the full summer foliage shadow is not so well defined. The leafless shadow is well noted, the huge tree more delicate when it is branches alone. Very nice!

Parsing the nuance of the Queen's English is so cool - most of us do not experiment with structure as you have in this poem. A wonderful discovery in your poem!

Never saw a wall of shadows, but they look very nice. You always find such good shadows to share.

Wow! Powerful words along with an awesome photo. Love the mix of clouds and shadows. Well Done!!